V4 was my ultimate strategy with the 100% end goal of a positive net return throughout all the years of historical data I have on different pairs (USD, EUR etc.) and to protect the portfolio in the next bull run. My personal guideline was to beat the market while having limited exposure to the crypto market. Purely as a nice-to-beat guideline.

But V4 can be brutal as it is slow and makes many losses for a long time in the long tail of the bear market. But it will make up for it once the market resurges. During this period, which is the most difficult period to handle for V4, I've decided to make it somewhat easier with introduction of V5, which makes it mentally easier by trading more frequently.

V5 is a good starting point to get used to Coinbakers but it does not outperform V4 in the long run. Plus, more trading, costs more in fees.

The Chase to Reduce Risks

I tried to minimize risks on timeframes we do not have eyes on. We run on hourly candles but I thought knowing real-time price action and using stop losses based on those prices, would reduce our risks. Thus, the supporting strategy was born. I can add a stop-loss and ATH stop-loss, for each strategy. Super nice system.

Then I wanted to trade crashes, this reduces our risk when V4 or V5 sells after a crash. Depending if certain parameters hit, we will buy in and the crash trading strategy safeguards us during the period it holds the asset.

This meant I needed something to trade/manage multiple strategies. So the Master strategy was born.

The mistakes I made was to change the backtest as a leading factor, to a supporting factor. With backtests I try to eliminate as many variables as I can. The backtest result would be reason for me to implement an update or not. But always tested over all the known variables.

Then with the supporting strategy, instead of reducing risks by monitoring real-time price action, I actually increased the risks. Not because I added a stop-loss, but because I added another untested variable to the strategy. From the moment I enabled this, including the ATH stop-loss, the backtest results would mean less.

Then with the Master strategy, same story. Instead of reducing risks by having multiple strategies monitoring difference scenario's and timeframes, I added another layer of unknown variables.

This is all besides the bugs/edge cases due the complexity added to the system.

The reasoning for the Support- and Master strategy sounds real good on paper, and it looks like we are working hard to mitigate risks and improving the strategies. However, all tests are done in isolation (each strategy with its own result, and the backtest engine doesn't have access to real-time data so technically untestable how it would have reacted towards real-life scenerio's). However, practically, it increased risks, and lowered the quality of the signals.

Besides that, I think I went too far with trying to reduce risks. V4 is already very conservative, and it does what it is designed to do. It's a mature and tested product, unlike the Master strategy. Of course with every position we go into, we will hold risk, and that's fine. Markets go up and down. We win some, we lose some.

With that said, let's take a look at the vanilla results of V4 first on the latest V4.17 over the last year. 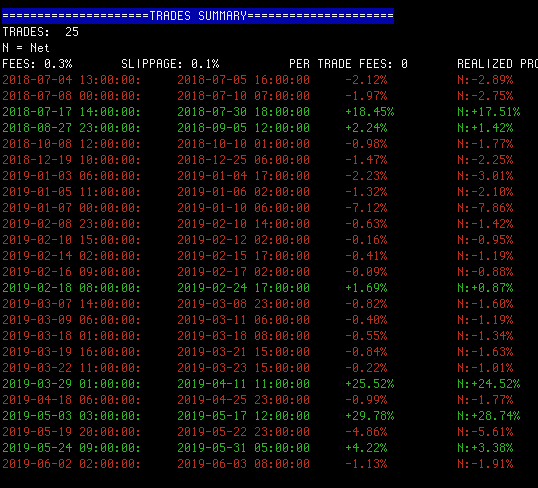 That's a lot of red, and January 2019 especially hurts. Remember this is the worst period V4 can experience. We had similar periods of many losses but those would end sooner. This makes sense as the market grows and cycles will take longer.

The column on the most right is the net result when taking fees and some slippage into account.

This takes us to the next summary. These are gross results, so when taking net results, more months would be red. And making 0% green is less depressing than seeing red 😌

And eventually, the performance sheet: 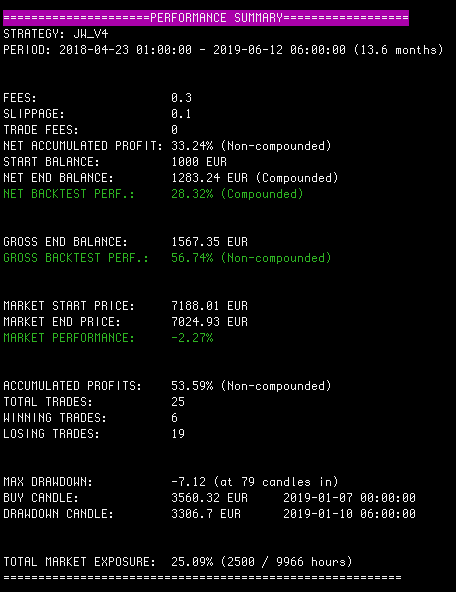 The one to look for is the net backtest performance. The most upper highlighted in green. The one below, gross, are the results when not taking fees and slippage into account. You see the one's who really becoming rich are the exchanges.

Also take note of the winning vs losing trades. And this one makes actually a good example of what I'm going to explain. Win ratio is a vanity metric. Because it's not about how many wins you have, but how big the winners are vs the losers. So it is not something I pay too much attention to, BUT it does give an indication of who hard this period would be mentally while running this strategy.

There's such a thing called joy/pain meter when trading and also gambling. A loss hurts twice as much as the joy of a win, that's just how we humans are wired. So you will feel neutral when having 2 winning and 1 losing trade based on that. So what does 6 winning trades and 19 losing trades mean? Well, a world of hurt when you keep a close eye of the trades. Even though your portfolio would be up with 28% and you wouldn't be in major market crashes.

That's why leaving such strategies alone and not looking and caring too much about its trades, will leave you generally more in a happy state, instead of following the market and the trades religiously.

But I'm getting sidetracked here.

This is based on the most recent version of V5.7.0 If you didn't know you can check changelogs here: https://app.coinbakers.com/strategy/changelog. I record all changes.

Note: Updates going from for example 5.7.0 -> 5.7.1 are usually bug fixes or improvements in code without affecting the historical results. Updates from 5.7 -> 5.8 will contain updates that do affect historical trading. 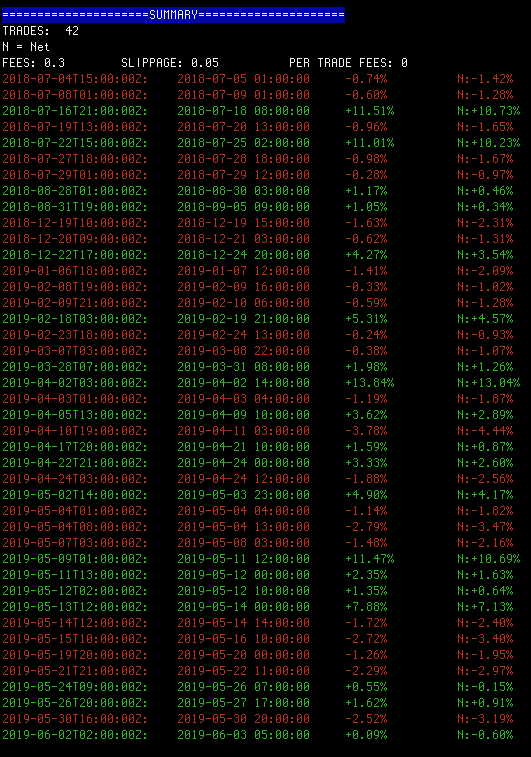 As you can see almost double the trades compared to V4, and the wins and losses balance each other out quite well, if we take a quick look at reds vs greens. This is the purpose of V5, having less weight on each trade. Making it easier to get into when starting out with Coinbakers.

The monthly summary are almost all green. Again these are gross results, so the months Aug 2018, Sep 2018, Mar 2019, would most probably end up in red due to fees. You can see a nice uptick in the amount of trades as the market changed from being stagnant, back to picking up steam. For better or worse, as more trades does not equal more profits. 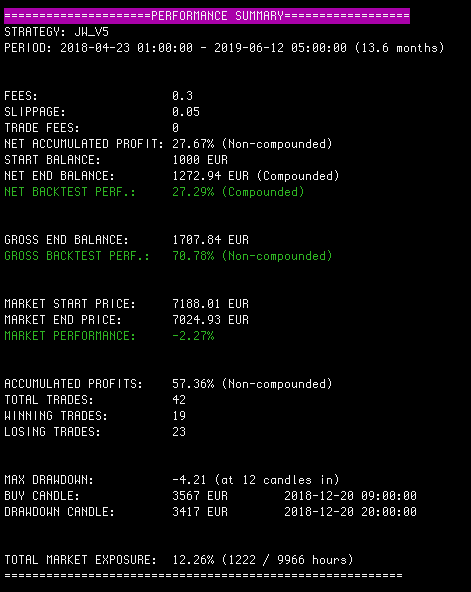 And the performance summary of V5 over the same period as V4. I see that I set slippage at 0.05% here, forgot to update that to be in sync with the results of V4 (0.1%). I upped it from 0.05%, to 0.1%. Slippage is the difference in price in what we are being quoted, and the eventual price when the order is filled. This is an unknown variable and is different with each trade. It is dependent on the volatility and order book depth. It is good practice to take some price difference into account while backtesting.

The net performance is 27%, just under V4. The difference between gross and net is much bigger than V4. This has to do with V5 executing more trades, so we pay even more in fees. Exchanges like V5 better than V4 for sure. The winning vs losing trades are somewhat comparable, so you will still feel miserable, but less so than V4. Haha, I love the joy/pain meter.

So, in summary what I'm trying to tell you here is that we should go vanilla. No supporting strategy and no Master strategy yet (until I can backtest over different strategies, which is complicated so not sure if I will reach that stage ever).

The vanilla results are better than when having the Supporting strategy running next to it. The same applies for the Master strategy, which added even more variables. It sounds kind of counter-intuitive, but I think me trying to reduce risks, falls into the same fallacy as, more trading = more profits. More trading does not equal to more profits (can even be less, due to trading fees), and updating the strategies in the way I did, does not mean lower risk or increased performance per sé.

With that said, all strategies are now running vanilla. I will think about what to do with the Master strategy but for now they are running vanilla V4. Btw, I do not recommend keep switching strategies. Start with V5, to get used to our systems, then if you think you can handle it, switch to V4. See if that works for you, and then otherwise switch back to V5.

I will also switch performance reviews on a quarterly basis, as month to month does not reflect the long term strategies very well. I will share more of this in a next blog post.

As always if you have any questions or concerns, please let me know.

It's going to be pretty boring but that's actually how it should be.